The Integral mission is providing new insights into the Universe's most violent and exotic objects, such as black holes, neutron stars, active galactic nuclei and supernovae.

Integral is helping us understand processes such as the formation of new chemical elements and the mysterious gamma-ray bursts, the most energetic phenomena in the Universe. Integral is the most sensitive gamma-ray observatory ever launched.

Gamma rays are even more powerful than the X-rays used in medical and dental examinations. Fortunately, Earth's atmosphere protects us from this dangerous cosmic radiation. However, this also means that gamma rays from deep space can only be detected by satellites.

Integral is a truly international mission with the participation of various ESA member states plus the United States, Russia, the Czech Republic and Poland. The four instruments are exploited by teams led by scientists in Italy, France, Germany, Denmark and Spain. A Russian Proton rocket placed the spacecraft into orbit, while ESA and NASA ground stations stay in touch from Earth.

Since late 2007, the XMM-Newton and Integral FCTs have been merged such that Integral team members provide back-up support to XMM-Newton and vice versa. The after-hours engineering on-call rota is also shared, with just one engineer having responsibility for both missions outside normal working hours. Additionally both missions are now controlled in parallel by just one Spacecraft Controller.

Additional ESOC teams provide ongoing support to Integral in the areas of Flight Dynamics, Ground Facilities and Software Support, among others.

On 22 September 2021, around midday, Integral went into emergency Safe Mode. One of the spacecraft’s three active reaction wheels had turned off without warning and stopped spinning, causing a ripple effect that meant the satellite itself began to rotate. As a result of the spacecraft turning, only sporadic data were reaching ground control and the batteries were quickly discharging. With just a few hours of power left, it seemed possible that the 19-year-old mission could be lost.

The Integral Flight Control Team, together with Flight Dynamics and ground station teams at ESOC, teams at ESAC and Airbus Defence & Space, set to work. With quick thinking and ingenious solutions, they found the problem and rescued the mission. Click here for more info on this story.

Integral was launched on 17 October 2002 at 06:41 CET by a Russian Proton rocket from Baikonur, Kazakhstan. The launch sequence, involving a delayed injection of the rocket upper stage 50 minutes after lift-off, was nominal.

The satellite was placed in a 66-hour high elliptical orbit with an apogee of 153 000 km, a perigee of 690 km, and an inclination of 51.6°. The satellite was acquired, as planned, 1 hour and 32 minutes after lift-off by the ESTRACK station at ESA/ESAC and 3 minutes later by Redu station.

LEOP included raising the orbit perigee from 690 to 9000 km and lasted, as planned, for six orbits. It involved five perigee-raising propulsion burns at apogee 3, 4, and 5, and an apogee adjustment manoeuvre at perigee 6 to adjust the geo-synchronicity of the orbit to 72 hours. During the LEOP, the instruments were switched on and checked out.

The commissioning phase of the mission started on 4 November 2002 and lasted until 17 December when the mission entered officially its routine phase. During commissioning, calibration of the spacecraft platform took place, the main instrument's high-voltage power was switched on, and scientists and principal investigators (PIs) at the MOC measured initial instrument performance before moving to the ISDC to assist with in-flight calibration of the instruments.

Routine science operations began, as planned, at the end of 2002. The performance of the ground and space segments continues to be excellent, and exceed the original mission specifications.

Integral has begun a series of four thruster burns carefully designed to balance its scientific life with a safe reentry in 2029. Detailed planning and teamwork will ensure that the satellite’s eventual entry into the atmosphere will meet the Agency’s guidelines for minimising space debris. Making these disposal manoeuvres early will also minimises fuel usage, allowing ESA to exploit the valuable satellite’s lifetime to the fullest.

The long mission duration is possible because all elements of flight hardware and software are still operating nominally - all consumables, such as fuel, etc., still have ample reserves. The continuing excellent performance and minimal degradation of the payload instruments make mission extensions highly worthwhile in terms of science return.

Routine communications for Integral are provided by the ESA ground station at Kiruna, Sweden, and by the DLR station at Weilheim, Germany. 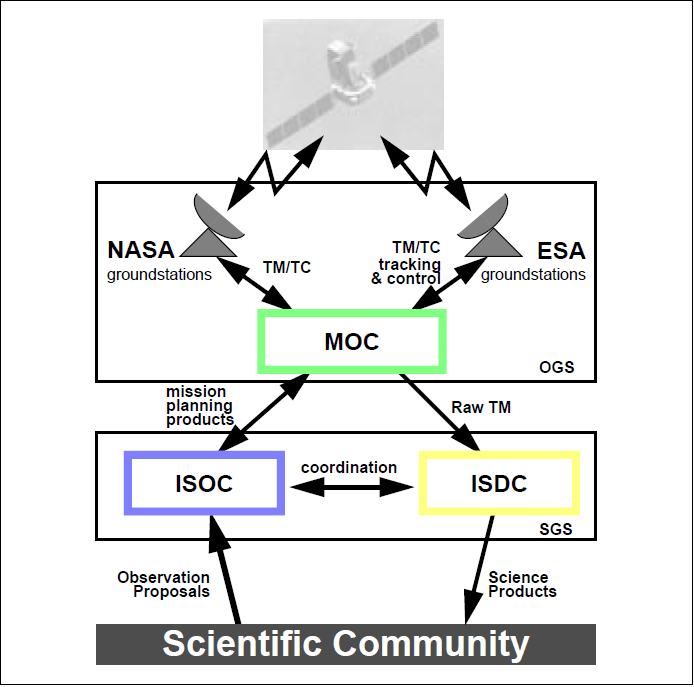 The MOC at ESOC is responsible for the operation of the spacecraft and instruments, for ensuring the spacecraft safety and health, for the maintenance of the satellite's on-board software, for the provision of flight dynamics support including determination and control of the satellite's orbit and attitude and for provision of all telemetry and auxiliary data to the ISDC.

Integral operations are executed using an automated time line. The time line is generated on a revolution-by-revolution basis, i.e. one time line covers the period from perigee passage to the next perigee passage, which is approximately three days.

The MOC maintains the on-board software and the operational database and is responsible for the short- and long-term archiving of the telemetry, telecommands and auxiliary data. The archive is consolidated (filling of data gaps) with the satellite playback telemetry received from the ground stations when required. In addition to the real-time link to the ISDC that provides the majority of the TM data within seconds, the consolidated data are put on CDs and provided offline to ensure data completeness.

The platform and payload

The platform is three-axis stabilised and to a large extent identical to that of XMM-Newton. All operations must be executed in real time, as no on-board time-line execution or storage of telemetry is available.

The main payload consists of the Spectrometer on Integral (SPI) and Imager on board Integral (IBIS).

These are complemented by two monitor instruments in the X-ray (JEM-X) and optical ranges (OMC), co-aligned with the main instruments, and a radiation monitor for real-time measurement of the radiation environment and safeguarding of the instruments.

SPI, IBIS, and JEM-X are provided with coded masks, allowing source localisation to an accuracy of better than one arc minute.

The payload, designed and built by European scientific institutes, provides the science community with an unprecedented combination of imaging and fine spectroscopy over a very wide range of wavelengths from gamma ray to optical. 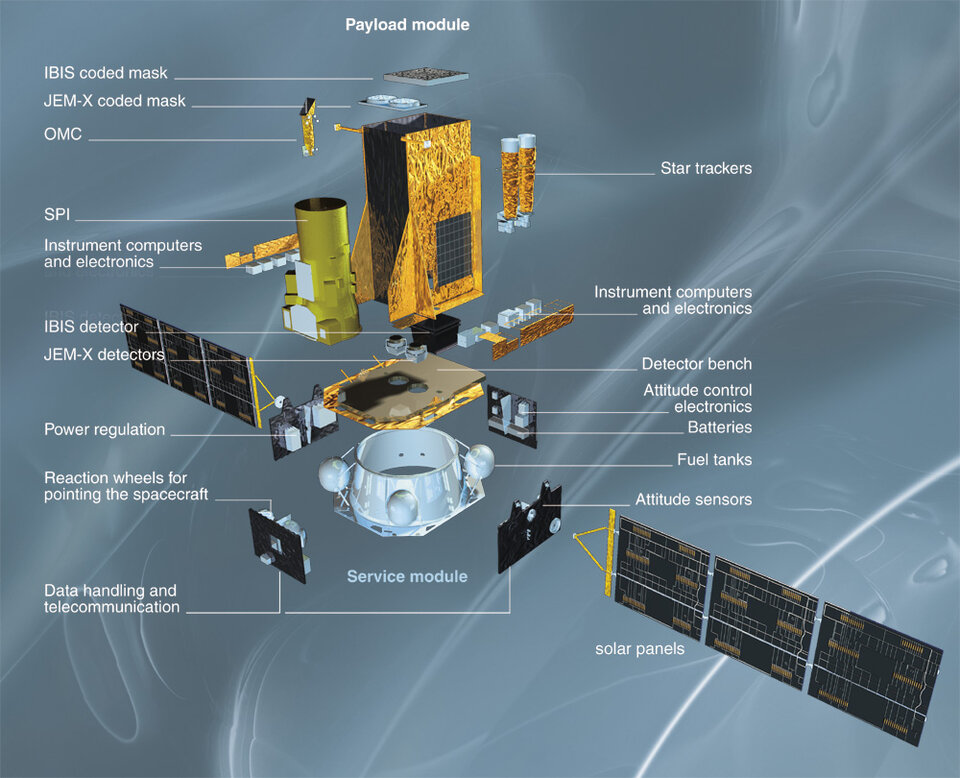